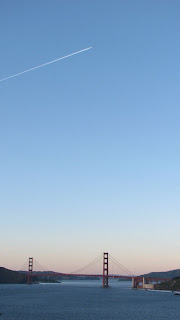 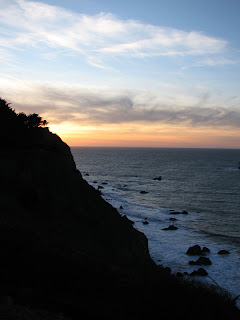 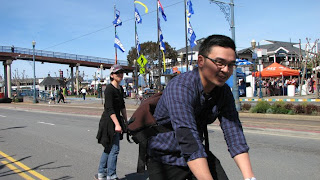 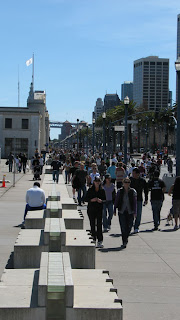 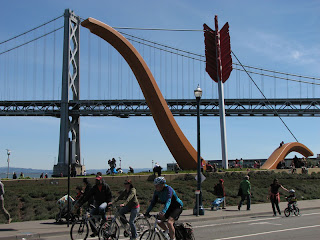 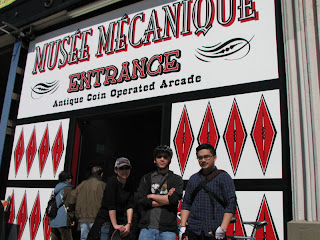 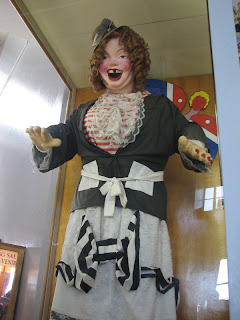 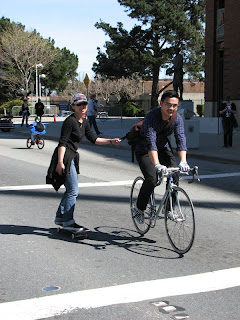 C.A.T.S. is back! And bigger than ever! This President's Day, the gang inducted three more members: Lark, Thien and Brandon! Welcome aboard, guys! (p.s. I don't know why this photo is cropped, but click on it to see the entire photo!)

It wasn't a very long ride at all (about 8 miles) but it was a hilly one. I'm not sure about the others, but these were the types of hills that don't look bad, but they kill me. Just shows how out of shape I am. But hey, it's exercise that I badly needed!

Break time! Thanks for the Clif Bars, Oz!

After we hit a breaking point, some of us split off into smaller groups. Brandon had to head back to work a little early, so he took off. Lark and Thien went on their own excursion to get some sketching done of the pretty terrain. The rest of us headed up into the skinny trails up the hill. It was a bit of a muddy ride...I was trying to be careful at first of not getting dirty, but once I felt the mud splashing on my leg, then I let go and splashed through the puddles freely! Mud is kind of fun!

At one point, Sherwin found a log to pose on! Yay the tradition continues...Oz and Sherwin on a log: Afterwards, some of us headed over to Manimal's house for some delicious handmade wontons! Thanks guys, they were the perfect ending to a good ride.
Posted by Cougar at 2/16/2010 05:44:00 PM No comments:

This week's ride was a short one...and a small at that! Only Manimal and I made it out this time. CATS numbers are dwindling! Gaahh...

That's ok, Manimal and I made the best of it. Started out at the Doggie Diner sign near the SF Zoo.

We rode around Lake Merced. Neither of us had seen this area of the city, so that was nice. One of the great perks of riding in C.A.T.S.!! *hint hint* you other CATS members have to ride with us more! Sheesh.

Anthony on a log! Ok ok, it's technically not a log, but it's more fun to say than "tree stump." 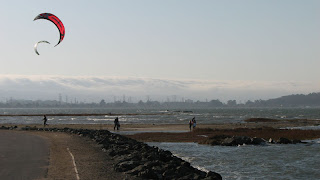 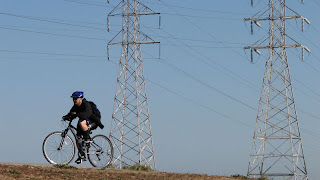 Manimal here with a report for Ride #8. A bunch of CATS members were busy this weekend, so we did a shorter ride. We met at Ryder Park and biked through Coyote Point. Unfortunately, the bike paths there weren't clearly labeled, and my map was in the car. We ended up wandering along the shoreline and stopping at a gas station for Drumsticks and Häagen-Dazs. Sherwin, being the daredevil, attempted the Crane Technique on a wobbly wooden post and riding on the top of a wavy retaining wall. Debbie safely avoided those vicious children on bikes and surfed a seal sculpture. 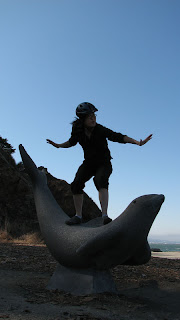 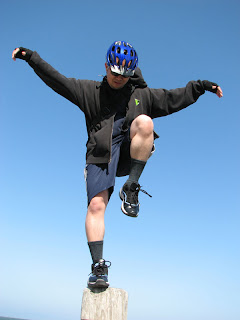 Around 4:30 or so, Debbie had to leave, but Sherwin and I decided to bike towards the San Mateo Bridge. This ride proved to be a lot more scenic and straightforward. We saw a dog park (our mortal enemies), some stray cats (our best friends), and a bunch of kiteboarders (daredevils just like Sherwin). On our way back to the parking lot, Sherwin noticed that his rear tire was completely deflated! Oh no! 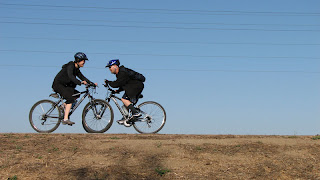 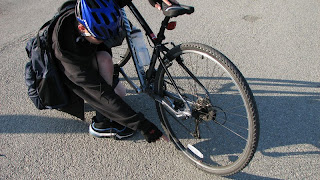 Now this isn't CATS related, but worth a mention. Traffic along the Bay Bridge was miserable because of Fleet Week, so Sherwin, Yen, and I went to B-Star on Clement Street for dinner. For those of you that don't know, this restaurant is owned by the same people that run Burma Superstar two blocks away. But in my opinion, this place is far better because the portions are bigger, the ambiance is better, and the wait is much shorter.

All of our dishes were delicious! For an appetizer, we ordered pork riblets in a sweet, sticky glaze. Our main dishes included melt-in-your-mouth fish fillets on a bed of leafy greens; grilled steak with mushrooms, asparagus, and mashed potatoes; and garlic noodles with duck. For dessert, we had a scoop of ice cream mixed with an espresso, sliced strawberries, and slivered almonds. It was the ultimate contrast in flavors: hot and cold, sweet and bitter, creamy and crunchy! Yum!
Posted by Hon Solo at 10/10/2009 11:13:00 PM 2 comments: 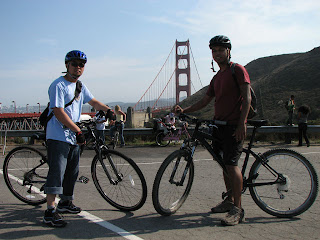 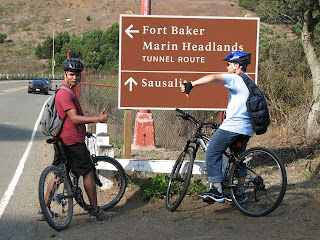 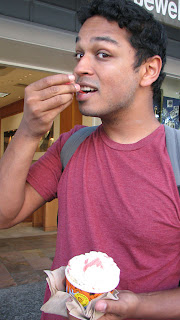 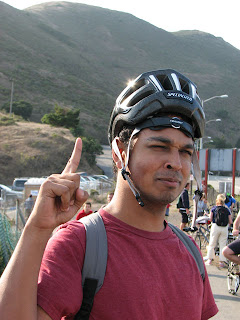 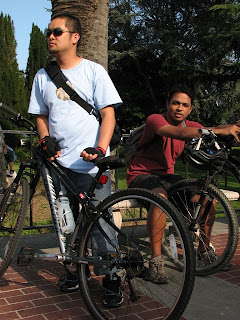 Cougar here! I'll probably be posting some highlight pics from past rides, but I just wanted to list the rides that CATS has done so far:

Ride #1: March 2009, Golden Gate Park - Anthony, Debbie, Kevin, Mikey, Tissue (and ALMOST Eidelyn)
Highlights: Debut ride! Lynx almost made it, but ran a little late and couldn't catch up with the gang. We'll consider her a half-member for now, but we're still waiting for her to join officially!

Ride #2: April 2009, Presidio and Golden Gate Bridge - Anthony, Debbie, Kevin
Highlights: Beautiful ride. Personally, it was one that I was afraid of, but definitely a nice way to see parts of the Presidio and GG Bridge I've never seen.

Ride #4: August 2009, Golden Gate Park and Great Highway - Anthony, Kevin
Highlights: I'm not sure because I wasn't there!

Ride #5: September 6, 2009, Golden Gate Park and Great Highway - Anthony, Debbie, Oz, Sherwin
Highlights: Dr. Sex Panther and Pum-raa officially join the gang! Car free Great Highway was fun. Detour at Polly Ann's for some ice cream.
Lowlights: I eat some pavement when a toddler swerves into my bike. Luckily the kid was ok! I also realize that I am way outta shape and I need to get back so that I can keep up with the rest of CATS!

So far, 9 members have ridden with us, but we're still waiting for more to officially join!